“Helen Lin is one of the greatest pianists of her generation…..hear classical piano like you never heard it before”


“ …..delivered with her virtuoso execution, poetic interpretation and emotional intonation.”

"The Lincoln Center has Wynton Marsalis. The Philly Pops has Peter Nero. And we have Helen Lin.”;
“Electrifying, soothing, energetic, and uplifting, she envelopes her audience with an intensity that includes emotions and exudes joy.”

".....Ms. Lin’s concert created a wash of powerful emotion for her audience and a most memorable evening....."

“ Lin brought the house down with a moving rendition of ‘America the Beautiful’, winning a standing ovation….”

“…flawless playing.  She is a pianist of exceptional ability, performing Classical, religious, patriotic, and jazz styles with unusual clarity and keen musical interpretation.  Not only has Lin succeeded in artistically performing these musical styles separately, as well as in combination, she brings acute sensitivity to each piece and performs them tastefully, charged with personal dynamics.  Her playing exhibits the highest musical standards of the most perceptive musician…”

“a must-have for any music collection”!
“she has segued for the listener varied music styles that range from classical to popular to jazz—mixed together and all in one package.  Her music is always performed in a virtuosic style that incorporates simplicity that is combined with ingenious use of polyphonic voicings and technique.” 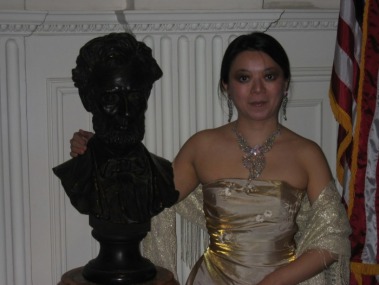