"One of my parents' deepest fears, I suspect, is that society would not properly value me as a musician, that I wouldn't be appreciated. I had very good grades in high school, I was good in science and math, and they imagined that as a doctor or a research chemist or an engineer, I might be more appreciated than I would be as a musician. I still remember my mother's remark when I announced my decision to apply to music school-- she said, "you're wasting your SAT scores!" On some level, I think, my parents were not sure themselves what the value of music was, what its purpose was. And they loved music: they listened to classical music all the time. They just weren't really clear about its function. So let me talk about that a little bit, because we live in a society that puts music in the "arts and entertainment" section of the newspaper, and serious music, the kind your kids are about to engage in, has absolutely nothing whatsoever to do with entertainment, in fact it's the opposite of entertainment. Let me talk a little bit about music, and how it works.

One of the first cultures to articulate how music really works were the ancient Greeks. And this is going to fascinate you: the Greeks said that music and astronomy were two sides of the same coin. Astronomy was seen as the study of relationships between observable, permanent, external objects, and music was seen as the study of relationships between invisible, internal, hidden objects. Music has a way of finding the big, invisible moving pieces inside our hearts and souls and helping us figure out the position of things inside us. Let me give you some examples of how this works.

One of the most profound musical compositions of all time is the Quartet for the End of Time written by French composer Olivier Messiaen in 1940. Messiaen was 31 years old when France entered the war against Nazi Germany. He was captured by the Germans in June of 1940 and imprisoned in a prisoner-of-war camp.

He was fortunate to find a sympathetic prison guard who gave him paper and a place to compose, and fortunate to have musician colleagues in the camp, a cellist, a violinist, and a clarinetist. Messiaen wrote his quartet with these specific players in mind. It was performed in January 1941 for the prisoners and guards of the prison camp. Today it is one of the most famous masterworks in the repertoire.

Given what we have since learned about life in the Nazi camps, why would anyone in his right mind waste time and energy writing or playing music? There was barely enough energy on a good day to find food and water, to avoid a beating, to stay warm, to escape torture-why would anyone bother with music? And yet-even from the concentration camps, we have poetry, we have music, we have visual art; it wasn't just this one fanatic Messiaen; many, many people created art. Why? Well, in a place where people are only focused on survival, on the bare necessities, the obvious conclusion is that art must be, somehow, essential for life. The camps were without money, without hope, without commerce, without recreation, without basic respect, but they were not without art. Art is part of survival; art is part of the human spirit, an unquenchable expression of who we are. Art is one of the ways in which we say, "I am alive, and my life has meaning."...

...From this and other experiences, I have come to understand that music is not part of "arts and entertainment" as the newspaper section would have us believe. It's not a luxury, a lavish thing that we fund from leftovers of our budgets, not a plaything or an amusement or a pass time. Music is a basic need of human survival. Music is one of the ways we make sense of our lives, one of the ways in which we express feelings when we have no words, a way for us to understand things with our hearts when we can't with our minds.

Some of you may know Samuel Barber's heart wrenchingly beautiful piece Adagio for Strings. If you don't know it by that name, then some of you may know it as the background music which accompanied the Oliver Stone movie Platoon, a film about the Vietnam War. If you know that piece of music either way, you know it has the ability to crack your heart open like a walnut; it can make you cry over sadness you didn't know you had. Music can slip beneath our conscious reality to get at what's really going on inside us the way a good therapist does.

Very few of you have ever been to a wedding where there was absolutely no music. There might have been only a little music, there might have been some really bad music, but with few exceptions there is some music. And something very predictable happens at weddings-people get all pent up with all kinds of emotions, and then there's some musical moment where the action of the wedding stops and someone sings or plays the flute or something. And even if the music is lame, even if the quality isn't good, predictably 30 or 40 percent of the people who are going to cry at a wedding cry a couple of moments after the music starts. Why? The Greeks. Music allows us to move around those big invisible pieces of ourselves and rearrange our insides so that we can express what we feel even when we can't talk about it. Can you imagine watching Indiana Jones or Superman or Star Wars with the dialogue but no music? What is it about the music swelling up at just the right moment in ET so that all the softies in the audience start crying at exactly the same moment? I guarantee you if you showed the movie with the music stripped out, it wouldn't happen that way. The Greeks. Music is the understanding of the relationship between invisible internal objects. This is why music matters.

What follows is part of the talk I will give to this year's freshman class when I welcome them a few days from now. The responsibility I will charge your sons and daughters with is this:

"If we were a medical school, and you were here as a med student practicing appendectomies, you'd take your work very seriously because you would imagine that some night at two AM someone is going to waltz into your emergency room and you're going to have to save their life. Well, my friends, someday at 8 PM someone is going to walk into your concert hall and bring you a mind that is confused, a heart that is overwhelmed, a soul that is weary. Whether they go out whole again will depend partly on how well you do your craft.

You're not here to become an entertainer, and you don't have to sell yourself. The truth is you don't have anything to sell; being a musician isn't about dispensing a product, like selling used cars. I'm not an entertainer; I'm a lot closer to a paramedic, a firefighter, a rescue worker. You're here to become a sort of therapist for the human soul, a spiritual version of a chiropractor, physical therapist, someone who works with our insides to see if they get things to line up, to see if we can come into harmony with ourselves and be healthy and happy and well.

Frankly, ladies and gentlemen, I expect you not only to master music; I expect you to save the planet. If there is a future wave of wellness on this planet, of harmony, of peace, of an end to war, of mutual understanding, of equality, of fairness, I don't expect it will come from a government, a military force or a corporation. I no longer even expect it to come from the religions of the world, which together seem to have brought us as much war as they have peace. If there is a future of peace for humankind, if there is to be an understanding of how these invisible, internal things should fit together, I expect it will come from the artists, because that's what we do. As in the Nazi camps and the evening of 9/11, the artists are the ones who might be able to help us with our internal, invisible lives."


Musical Child, which one are you?

SCHOENBERG EFFECT: Child never repeats a word until he's used all the
other words in his vocabulary. Sometimes talks backwards. Eventually,
people stop listening to him. Child blames them for their inability to
understand him.

IVES EFFECT: the child develops a remarkable ability to carry on
several separate conversations at once.

STRAVINSKY EFFECT: the child is prone to savage, guttural and profane
outbursts that often lead to fighting and pandemonium in the preschool.

BRAHMS EFFECT: the child is able to speak beautifully as long as his
sentences contain a multiple of three words (3, 6, 9, 12, etc).
However, his sentences containing 4 or 8 words are strangely uninspired.

AND THEN OF COURSE, THE CAGE EFFECT -- CHILD SAYS NOTHING FOR 4
MINUTES, 33 SECONDS. PREFERRED BY 9 OUT OF 10 CLASSROOM TEACHERS. 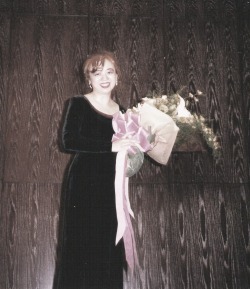